Speaking Out with Ohio's Youth

JJC is a state-wide advocacy organization that works with Ohio youth who are at-risk of involvement or involved in the juvenile court system.  JJC works mainly through policy advocacy and advocating with youth and families.

On August 30, 2018, a broad coalition of organizations, teachers, and students announced their #counselorsnotcuffs campaign around funding for school safety.  In July, the Ohio legislature passed HB 318, which included $12 million in school safety funding.  Originally, this funding was permitted to be used for hardware such as gun lockers and riot shields in Ohio’s schools.  However, this language was removed and the final bill allows funding for  1) school resource officer certification and training, 2) active shooter and school safety training, 3) educational resources, and 4) training to identify and assist students with mental health issues.   HB 318 also addressed limiting suspensions and expulsions for pre-K – 3rd graders and standards for Ohio School Resource Officers (SROs).   A full summary of HB 318 is available here and a brief on SROs by CDF-Ohio is available here.

The #counselorsnotcuffs campaign calls on Ohio legislators and schools to fund school safety initiatives that are research-based and support students.   This funding would support  improving school climate, establishing threat training and protocol, and providing effective student supports – like routine access to licensed and trained mental health and addiction prevention and treatment services and professionals, such as counselors, nurses, and social workers – to prevent school shootings altogether, while having emergency plans with outside law enforcement agencies in place when a rare incident does occur.

To learn more about the #counselorsnotcuffs campaign, you can access the campaign’s  principles and signatories, a press release, and a petition to sign in support of the campaign principles.

In recent weeks, the Cuyahoga County Juvenile Detention Center has come under scrutiny after a recent incident with youth in the facility’s care.  Unfortunately, the county’s response has focused on moving youth to the adult jail, which could potentially violate federal law.  JJC has responded to this by submitting a letter to the editor and providing quotes in two articles, which can be accessed here and here.   A recent article highlighted the need for an assessment center in the county.

On January 26th, JJC and the ACLU issued a letter to Cuyahoga County officials about the incident and the county’s response thus far with an accompanying press release, which was covered on cleveland.com.   On February 7th , JJC and the ACLU appeared on Cleveland’s NPR station show The Sound of Ideas to discuss  this issue; the show can be accessed here.

JJC will continue to work with the ACLU to monitor this situation and ensure that the county is responding in a way that will not harm youth and will be based on research-based practice on what works for maintaining facility and community safety.

On January 17, 2018, 16-year-old Joseph Haynes was shot and killed by a deputy in the Franklin County Juvenile Courthouse while attending a hearing.  JJC has issued a statement on this tragic event.   The Columbus Dispatch  has released several articles on this incident, including an article addressing the incident specifics an article questioning whether security officers in juvenile courts should carry guns.

JJC Responds to Shared Services Proposal from DYS and DRC

On December 11, the Department of Youth Services (DYS) and the Department of Rehabilitation and Corrections (DRC) announced a proposal to share services between the two agencies.  The plan proposes to co-locate the two agencies in the same building (which is both smaller and higher cost than the two agencies’ current spaces).  In addition, the plan proposes combining certain functions and housing these functions at either DRC or DYS.  For example, DRC will house accreditation/research, HR (including staff training), finance, and records, while DYS would take religious and volunteer services, quality assurance, and IT.

JJC released a statement expressing concerns about the proposal, particularly as the two agencies have very different goals and serve vastly different populations.  We are concerned that this proposal will dilute DYS’s current focus on youth and their unique developmental needs and could potentially lead to further merging in the future.

As the 2017-2018 school year starts, HB 410 – a bill that changes Ohio’s truancy and school discipline laws – goes into effect.  HB 410’s purpose is to work with students who are missing school to re-engage them in school and keep them out of formal juvenile court processing.  To learn more about HB 410, please visit JJC’s dedicated HB 410 page.

JJC and VOU Go to DC.

In July 2016,  JJC staff and 4 Voices of the Unheard (VOU) youth attended the National Juvenile Justice Network’s (NJJN’s) annual national conference in Washington DC. The conference brings together juvenile justice advocates from across the country to brainstorm, share best practices, and learn from each other as we push for reforms.

At the conference, Amber Evans, JJC’s Policy and Community Engagement Director, was awarded NJJN’s 2017 Emerging Leader Award after being nominated and chosen by her peers. Amber was selected for her unique work blending organizing and policy efforts and was featured in an article. Amber shared her award with the VOU youth at the conference and it was amazing to see Amber’s dedication and passion for the work recognized. 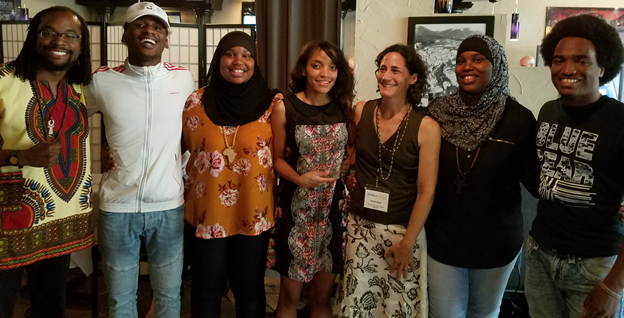 The VOU youth who attended the conference also flexed their leadership – leading icebreaker sessions, visiting OH legislators, speaking on several panels to lift youth voices, and sharing spoken word pieces at the reception. With support from Amber and VOU mentor Ekundayo Igeleke, they explored the city and each grew into their leadership and saw new possibilities for themselves, like flying on a plane for the first time or picturing themselves attending law school.

Thanks to NJJN for the opportunity and to all of you for your ongoing support of JJC!

Theme by Anders Noren — Up ↑